Go to a section?

Blog 38. Creating Habitat for Beneficials to Control Aphids in Pecans

For the past growing season, my staff and I have been involved with designing and managing a cover crop mix in pecan orchards in Northern California to attract beneficials, which provide some control of two species of pecan aphids. This monitoring took me back to the days in the early 1980s when I was working as a licensed pest control advisor in Corralitos, CA, monitoring mites, fruit tree leaf rollers, and codling moths in apple orchards in the area. I enjoyed the work then, and I continue to enjoy observing the progression of a crop’s biology.

Controlling aphids in pecans with chemicals generally requires two or three spray applications over the season. By planting a cover crop, we believe the grower has saved one or two sprays, one of which would likely have been a neonicotinoid, a class of insecticides which have been banned from Europe due to impacts on non-target organisms. We’ve also learned that alternate row mowing of the cover crop can extend the flowering and, therefore, the availability of nectar and pollen for supporting a wide variety of beneficial insects that suppress aphid populations. On a personal note, it was an absolute joy to walk around in a diverse cover crop mix, with the perfume of Persian clover all about, while hearing and seeing the incredible diversity of life these practices bring into an orchard, compared to a bare dirt orchard floor. It was a privilege to do this work.

With funding from California Wildlife Conservation Board, this project is a collaboration between the Environmental Defense Fund (EDF) and the National Center for Appropriate Technology (NCAT) to work with two pecan orchards: one at PacGold in Colusa, owned by Ben King; and one at Bypass Farms, managed by Ammy Reyes, on the north side of the Sacramento River, just east of Route 5. The goal is to develop habitat in or adjacent to the orchard that can support beneficial insects, including monarch populations.

To date, the cover crops have saved the grower of the larger orchard (Pacific Gold, 197 acres) at least one spray, perhaps two. (See Table 1 for cover crop species mix and comments.) Because of the low price of pecans, this grower made a commitment not to spray for the whole season. This is fortunate for us because we can observe the pest-predator evolution throughout the season.

The NCAT team does three types of monitoring. Every two weeks, we sweep at 10 locations in the larger orchard to better understand what beneficials are coming into the cover crop. We also place new sticky traps in the pecan canopy to better understand if the beneficials from the cover crop are moving into the canopy, as well as to determine which parasites and predators are in the canopy. We’ve found many green and brown lacewing adults, other predators, and many species of small, parasitic wasps.

We perform weekly monitoring of aphids in the pecan canopy. This information provides the grower with some good data for making spray/no-spray decisions. We select three compound leaf samples from each of 20 trees located around the 200-acre orchard and count the aphids, as well as green lacewing eggs, and other predators, such as all life stages of lady bird beetle, assassin bugs, syrphid flies and spiders. The aphid counts are listed in the graph below by date. As you can see, the aphid counts peaked in late August and then plummeted pretty dramatically as predator populations caught up with the aphids. The aphid populations slowly increased and exceeded the late-season threshold of 10 aphids/leaf, but aside from some honeydew and some sooty mold (which grows on the honeydew but doesn’t damage the leaves), I didn’t observe any damage from the late-season yellow pecan aphids. And the late-season counts never exceeded the early-season threshold of 20 aphids/compound leaf. 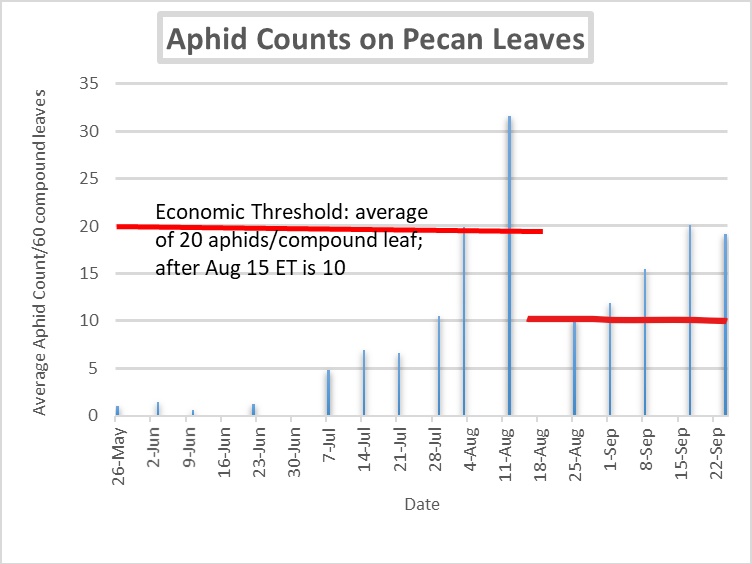 The aphid populations are being managed by the changing array of predators, including very tiny spiders that weave small webs on the leaves. These tiny spiders feed on the first and second instars of the aphids, just as newly hatched ladybird beetle larvae do. Small predators, small prey. But we also found that small predators, such as very small lacewing larvae and ladybird beetle larvae (second or third instars for you entomologist-types) will attack winged adult aphids (see photos).

NCAT and EDF sat down with the PacGold grower and developed a cover crop mix of seven species (see cover crop table). I should note that we experimented with both drilling the larger seeds and broadcasting the smaller seeds to see the results. It should be noted that growers would normally do one or the other, not both.

A mama spider and her egg mass. We found many spiders smaller than this preying on aphids. 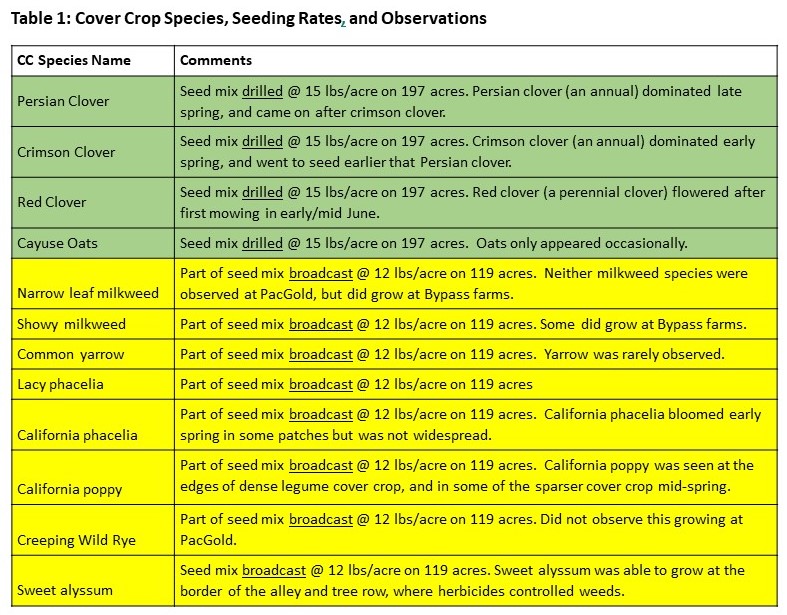 In the sticky traps, we found many very small wasps that are either insect egg parasites or aphid parasites, but because of the heavy predation of the aphids, we found very few aphid mummies (aphids that have been parasitized). There was likely a high turnover of aphid populations due to predation, so the wasp parasites didn’t have enough time to mature before their host was eaten. Having a diverse array of predators and parasites, with different prey and host preferences, provides dynamic and flexible aphid suppression. The photos show some of the predators and parasites we’ve found.

One example of the dozens of species of small, parasitic wasps that we found in the cover crop, as well as in the pecan canopy. This tiny wasp is likely an insect egg parasite or aphid parasite.

Alleys in orchards are underutilized as habitat for beneficial insects. What we found was not surprising—planting cover crops in the alleys can provide nectar and pollen resources for a wide range of beneficials, some of which migrate into the pecan canopy in search of prey. It’s good to remember that cover crops, which require management inputs, are an investment in the biological system of checks and balances which supports populations of parasites and predators of aphids and other insects. Investments such as seed costs, planting costs, and other management considerations (e.g., seed drill or broadcast?), mowing costs, can have significant returns. There is, however, a learning curve related to how best to manage the cover crop. Knowledge about when to plant the cover, what species to include, and when to mow, will be guided by experience.

If you’re interested in planting cover crops, there are many resources, including NRCS, RCDs, NCAT, other nonprofits, and seed suppliers. For example, we found that mowing alternate rows is less disruptive to beneficial insects. Cover crops are also an investment in the soil, supporting a healthier soil, which will store and cycle nutrients more efficiently, and absorb and store more water.

Due to their long growing season and late harvest, pecans are ideally suited to cover crops. They’re generally harvested in October, and if the trees are irrigated with microsprinklers, cover crops can be grown in the alley for several months to attract and maintain populations of beneficials. Alternate mowing of alleys, spaced about every two weeks, can allow cover crops to go to seed, and at the same time help extend the time flowers can provide nectar and pollen resources for the beneficials.

This blog has described just a few aspects of this project. If you are interested in learning more, contact me at rexd@ncat.org, or 530-792-7338. For information about a wide range of sustainable and organic practices, visit NCAT’s ATTRA website at www.attra.ncat.org.

A Pictorial Guide to Hedgerow Plants for Beneficial Insects

All photos by Rex Dufour, NCAT